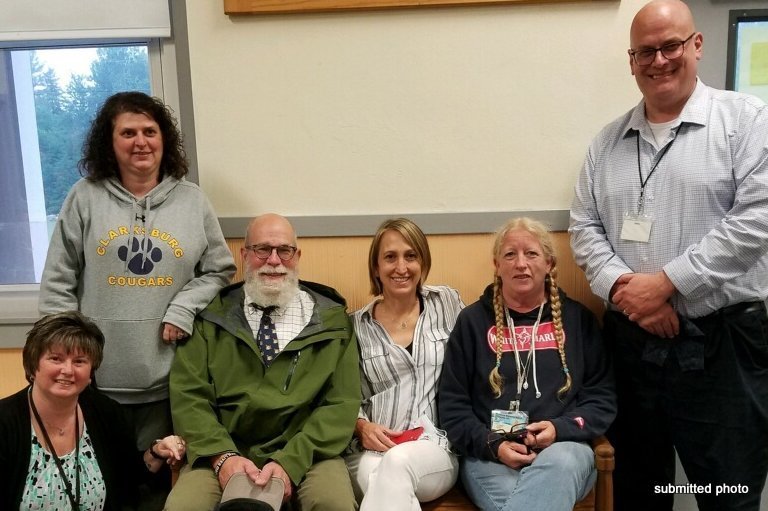 FLORIDA, Mass.  The Gabriel Abbott Memorial School community said goodbye to longtime Principal Heidi Dugal with a special bench to commemorate her years of service to the school.

"Heidi is an amazing educator and school leader who has made a positive impact on countless young lives both in and out of school," said Northern Berkshire School Union Superintendent John Franzoni said at Monday's event. "It's been wonderful to see the outpouring of gratitude over the last few weeks by so many to recognize her retirement and thank her for all she does to support her students.  Heidi doesn't seek or want this attention, but she is certainly very deserving of it for all she has done and continues to do."

"I was surprised," Dugal said. "Typically I avoid the pomp and circumstance. I am the queen of the Irish goodbye."

Dugal has been in education for more than 34 years. She started out has a substitute at Drury High School in North Adams while attending what was then North Adams State College. She ended up following her mother and grandmother's footsteps into the classroom and earned her master's degree in education from Cambridge College in Boston. All of her children would be her students during her 15 years or so as a teacher at Abbott, where she had also gone to school.

She taught at Readsboro (Vt.) and Savoy Elementary School first and later spent a year as principal at the Savoy school before returning as principal of Abbott in 2008.

She said returning to Abbott Memorial was a highlight in her career.

"I grew up here. I went to school here. So that was something," she said. "Working with the same teachers that had me. That is humbling especially after the trouble that you may have caused in the classroom."

Dugal said she did consider staying a few more years, but this last year with the pandemic has not been easy. Especially in a community with limited internet access.

Dugal said this is actually her second bench, and that school staff installed one outside in her name some years ago. It was a community effort to refurbish a bench that had some of her known sayings burned into the wood such as "You could be the ripest juiciest peach, and there is always someone who doesn't like peaches."

She said she had a few trips planned this summer but doesn't plan to stop working altogether.

"I know I will want to work and do something," she said. "My kids say just make sure it is not 24 hours, 7 days a week like teaching. But it is the most wonderful career in the world."

"It is always easy to have a bad day and to get negative," she said. "You just have to stay positive and stay passionate about what you are doing."

Franzoni said the School Committee already went through an interview process and has agreed to hire Martin McEvoy as the new principal. The current superintendent in Hatfield and former principal of Lanesborough Elementary and Herberg Middle School in Pittsfield will begin July 1.

Franzoni said he certainly has big shoes to fill.

"It has certainly been my honor to work with Heidi the last three years, and she has set a great example for all of us on how to be strong, caring school leaders to meet the needs of all students," he said. "She will definitely be missed, but she leaves a tremendous legacy at Abbott Memorial."