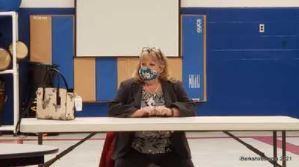 At least in the Northern Berkshire School Union.

Lisa Blackmer, town treasurer for Buckland, was selected on Thursday to fill the position being left vacant by Jennifer Macksey, pending contract negotiations.

Macksey, assistant superintendent for business and finance, will be sworn in as mayor of North Adams on Jan. 1.

Blackmer was the only candidate brought forward for the position of business administrator for the school union that includes the towns of Clarksburg, Florida, Monroe, Rowe and Savoy. She was peppered with questions ranging from grant writing to communicating with town and school officials in five communities to her management style.

"I have been the treasurer/tax collector for the town of Buckland for over five years and it's a great town. I love it there. I don't dislike my job, but there's really nowhere to go from where I am," Blackmer told the committee members on Thursday night at Clarksburg School. "This is something that I feel is in my wheelhouse that I can learn what I don't know and apply what I do know and feels like a next step."

The North Adams resident said she thinks of Northern Berkshire as her community and that she would much rather use her skills and her experience to improve things here.

In response to how long she would stay in post, Blackmer said she might "possibly retire from it."

She described herself as being task focused, particularly when doing budgets and talking about personnel policies, and ensuring people she trains understand why things have to be done in certain ways. She also noted grants she had written and how it was important to consider the long-term ramifications of those grants on education and town finances.

Blackmer was confident she could obtain her business administrator license required by the state Department of Elementary and Secondary Education.

"I've always been a part of continuing education, professional development. I've always tried to do that," she said, in response to getting her certification as business administrator. "It wasn't a requirement on my job to be a certified treasure but I went and did that and I'm working on my certification for the collector ... professional development is kind of what I do, along with my job."

She said she had completed her master of business administration and a master's level program on leadership and government while working full time and serving on local, regional and statewide boards, and recently completed procurement training on her own.

"I think my overall knowledge of municipal finance and my big picture skills are probably my strength," Blackmer said. "My weakness in this case would be in the weeds, the details of school finance, but I feel that that's a skill that's easier to learn than how to think big picture."

She joked she was so organized she "dreams in spreadsheets."

She said she would build on the work that Macksey has already done since it wasn't worth reinventing the wheel but rather tweaking things as personnel and programs change.

The School Committee members were generally positive although they had two concerns: Blackmer's lack of experience in educational finance and her involvement in other boards and organizations.

"She is very well versed with a lot of the governmental side of things but she did say she doesn't have as much experience with the school," said Carla Davis-Little of Monroe. "There might be some challenges with the school and every thing. But again, we only have one person interview for the position."

Davis said she was impressed with Blackmer but would have liked to have had another candidate to compare.

"I do have some concerns about how much involvement she has with a lot of various things where that may distract her from learning to the position," said Arleigh Cooper of Savoy, but also thought she had strong qualities and a good attitude.

Others saw Blackmer's busy life as a positive.

"I think people who have lots of goals and do things get it all done," said  Susan Zavotka of Rowe. "She appears to me to be a responsible person who wants to do things."

She thought even with other candidates, Blackmer would have stood out.

Matthew Crowningshield of Rowe noted her passion for professional development, describing it as like a hobby for her, and Chairwoman Judith Oleson of Florida acknowledged Blackmer is involved in a lot "but she has the strength and dedication and could be a great asset."

They agreed that she seemed highly organized and capable of learning the job.

After going into executive session for a discussion of administrative contracts, the committee voted unanimously to offer the post to Blackmer. The committee also voted to make Josh Arico's title to be the director of Information technology and authorized Superintendent John Franzoni to hire Cheryl Boillat as the part-time interim director of student services until Stephanie Pare can be replaced.

Blackmer had indicated she could not start until the end of January to give Buckland appropriate notice. Macksey, whose last day is Friday, acknowledged there would be a gap but said this was primarily budget preparation period. There is, however, Clarksburg's books left to be closed. The town is behind in its financial processes but has hired a town administrator and is seeking a treasurer.

"We're going to miss the heck out of you but we wish you the best," Oleson told Macksey