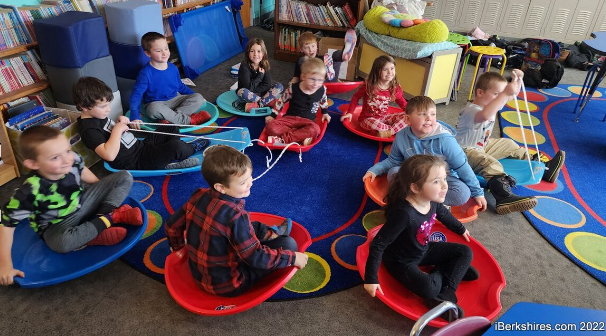 FLORIDA, Mass. — This past weekend's snowstorm was the perfect accompaniment to the Florida Mountain Snowmobile club's gift to local schoolchildren: sleds.

The snowmobile club handed out a sled or saucer to every child at Gabriel Abbott Memorial School on Thursday from preschool to Grade 8.

"I used to go to school here, I grew up here, and I remember the snowmobile club, when I was a kid ,used to do pumpkins," Therrien said. "They would donate them to the school and all the kids would carve them. And this year, we couldn't get pumpkins and we thought it would be a good idea to try something different for Christmas."

The sleds were a complete surprise — along with the fact that Friday was about to be a snow day (more than a foot of snow would fall over the weekend). That part was kept under wraps as club President Joseph Therrien and members Darlene Waitt and Timothy Keating followed teacher Monica Wissman to the classrooms.

She knocked on one classroom door to say the club was there with a present for the students. One student yelled back, "A snowmobile?"

The reception ranged from giddy to wary. While the kindergartners rocked away in the saucers, the sleepy pre-K crowd wasn't quite sure what to make of the gift-giving.

Waitt said her daughter had attended the elementary school and Keating had a granddaughter in the school.

"It's nice to do something for the kids and I sure needed this," Waitt said, with Keating adding, "especially after COVID."

Keating also noted there was a snowstorm coming so the "kids will get to enjoy them on the snow day tomorrow."

The sleds were donated by club members — everyone who came to the club's Christmas party brought a sled or three. It was enough to ensure that every child at the school got one.

"I like to see the smiles. And we got the little one who thought we had a snowmobile for him," Waitt laughed.

The children held up their sleds for photos with the club members and thanked them. "Merry Christmas," said one class, "and Happy Birthday."